Introducing our first ever, team of the season 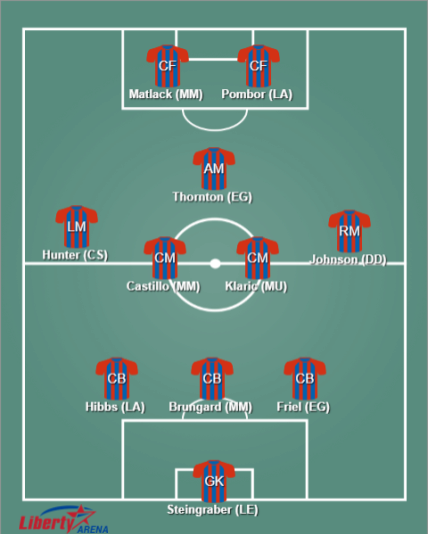 We’re proud to announce our first ever Adult Soccer Team of the Season for the Spring 2018 season. We had to make some really tough choices, but overall, we feel that the team named below is fair representation of the league’s best talent. We decided to name a full team of 11 players and do our best to place players into realistic positions for a regulation game.

Paul was absolutely immense for Lycoming Engines this season and playing a major role in keeping them in playoff contention until the last week of the season. He brought more to his team than excellent shot stopping- his distribution with his feet was crucial in helping his team play out from the back. Paul tallied 39 saves and 13 goals allowed, boasting a save percentage of 75%.

For this team, we classed Danny as a defender, but he could play virtually anywhere. He normally took responsibility for marking the oppositions best player and did an excellent job containing some of the leagues best attacking talent. Additionally, Dan contributed 3 goals and 5 assists.

Paul was one of the toughest defenders in the league and was a big contributor towards the Mountaineer Mondaze impressive defensive record. In addition to his excellent defending, Paul added 1 goal and 3 assists.

Joe was always solid for Evergreen, generally taking up defensive positions for his team, while still able to spring forward to contribute in the attack. Evergreen always looked liked title challengers when Joe was on the field. Joe scored 5 goals while providing 2 assists.

Sam Hunter was a true star on a team that struggled this season. Despite his team rarely having any subs, Sam always brought a ton of energy- his pace and dribbling skills allowed him to score some fantastic individual goals, while also scoring several impressive headers. Sam scored 5 goals while adding 1 assist.

Castillo ran the show in the Mondaze midfield- always calm and confident in possession, Castillo was always there to facilitate his team playing out of the back by connecting defensive to attack, allowing the Mountaineers to play an entertaining style of soccer. Enrique scored 3 goals this season.

Ivo Klaric also slots into central midfield for this team. ManChestHair United were always an exciting team when he played. His work-rate made him a very important player for his team on both sides of the ball. He’s a player with fantastic control- the ball seems to be glued to his foot at times and he rarely ever lost the ball. Despite not playing in a huge amount of games, Klaric still contributed 2 goals and 2 assists.

Alex was incredibly important to his team this season. He slots in on the right wing- a technical player with good fitness levels and the ability to glide past defenders. You could always count on him to take his chances and set up his teammates. When Dilly Dilly won, Alex was always the one to provide the heroics. 4 goals, 6 assists.

Nick Thornton played a massive role in Evergreen’s attack- Nick is a skillful player who never over-complicates things. He always seemed to pop in just the right position to score or provide an assist all while making the game look simple. He led the league in goals scored and was the joint leader in assists. 11 goals, 6 assists

Matlack claims one of our two forward roles. She brought skill, pace, and ruthless finishing ability to the league. Her build up play was also excellent, allowing her teammates to advance into the attack and get on the score sheet as well. 10 goals. 3 assists

A dangerous 1v1 attacker with scary pace, Pombor was equally competent in scoring goals as he was in setting them up. He able to create his own chances while being marked tightly, he was also more than able to pick out a pass as the defenders collapsed on him. He scored 6 goals while also assisting on 6.